AMP Winter Guard has recently been renowned for its entertaining, crowd-pleasing productions. Each time the cast enters a performance space, their show captivates the audience and leaves them on their feet. However, AMP comes from humble beginnings, from a staff dedicated to the cause and cousins, brothers, sisters, and friends who encouraged one another to join and grow with the team.

The organization was founded in 2007 as a program offered by the Camden Police Athletic League in Camden, New Jersey. The founder, Dreu Toliver, who is currently the organization's Executive Director, had the desire to start a color guard in Camden. Matt Hurley, Director of AMP, says, “Dreu actually set up a recruitment table at a local flea market to explain what he was trying to do, and thus, the color guard was formed.” He explains, “The first group of kids were all local, and most were related to each other.” 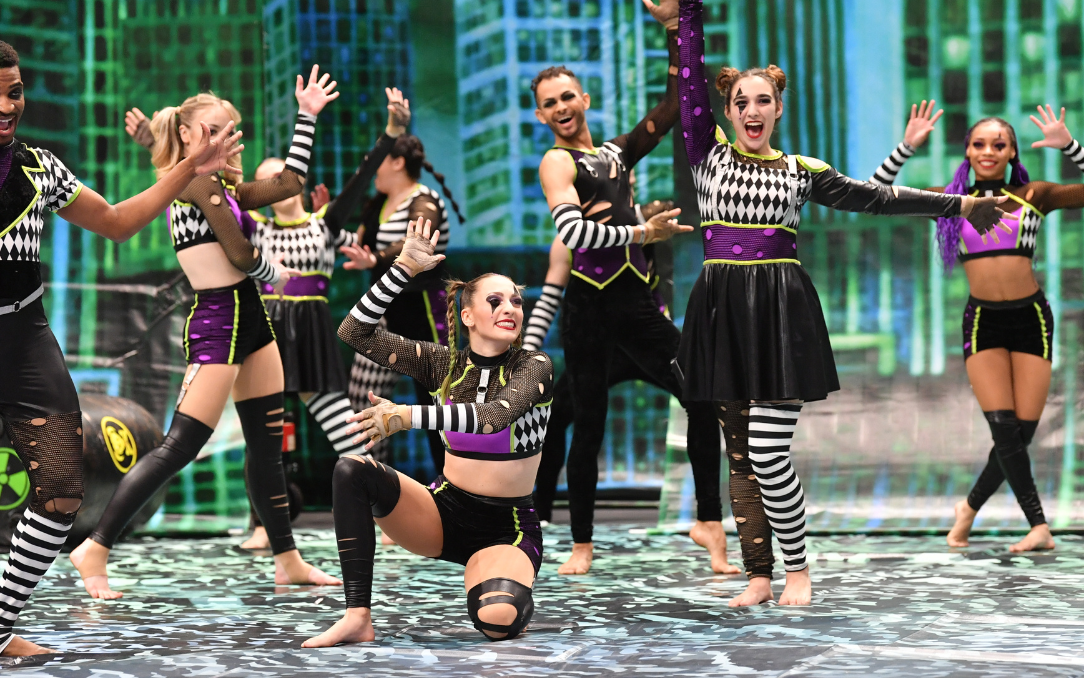 Matt Hurley was signed on just a year after the organization formed as a designer and instructor. He says, “AMP Winter Guard competed locally in the novice category until 2012 when they were promoted to Independent A.” In 2013, the team competed in their first-ever WGI regional and earned their spot as a finalist. Then, in 2014, they traveled to WGI World Championships for the first time. The team earned an Independent A Semi-Finalist spot.

Matt says, “the next four years were a whirlwind. AMP brought on designer Louis Hellinger, and the color guard grew in leaps and bounds.”

Over the next five years, the color guard earned such titles as:

In 2016, they were promoted from A Class to Open Class mid-season, and 2019 was the first year their second color guard traveled to World Championships. In 2020, AMP faced the same challenges as the rest of the community. However, the start of the year demonstrated incredible promise. Matt says, “in 2020, we fielded four color guards before the shutdown. We had our Independent World Guard, our Independent Open Guard, our Independent A Class Color Guard, and a Junior class color guard. Our organization had grown to 80 marching members.”

The organization came back in 2022 as if the challenges of the pandemic had never been experienced in the first place and became a 2022 Independent World Class Finalist. 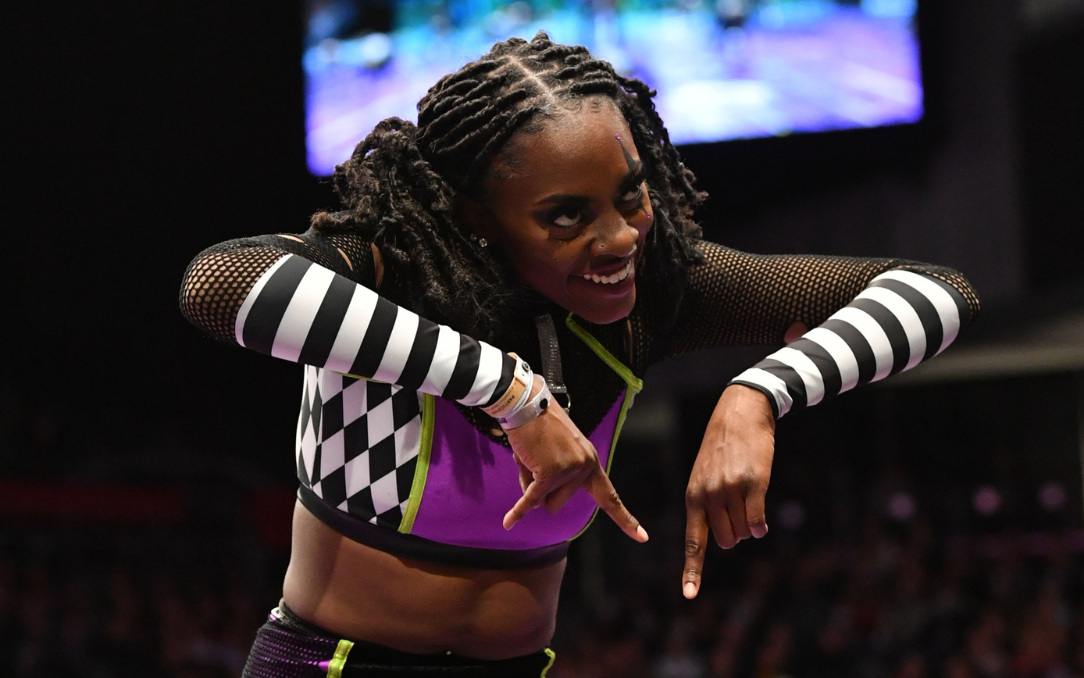 Coming up with a show concept doesn’t look the same each year. Louis Hellinger, Artistic Director, says, “when we were in A and Open class, we always started with music. Since we have been in World Class, we start with a concept. I am usually inspired by a story I want to tell or visually present.” Louis says, “I frequently go to Broadway shows and am constantly inspired by what they can do on a stage. I try pulling some of that theatrical production value into our own programs.

However, Louis explains, “the design team doesn’t really like to decide on a show idea until the cast is selected. This gives us the time to meet the performers, get a sense for where they are talent-wise and figure out what kind of personality they have.”

However, that doesn’t mean that ideas aren’t mulling around prior to auditions. Louis explains that the Joker concept was one of two ideas they were considering for 2022. The decision to do the Joker show was based on observing performers at auditions and the desire to do something a bit more fun as they re-entered the competitive scene post-COVID-19. 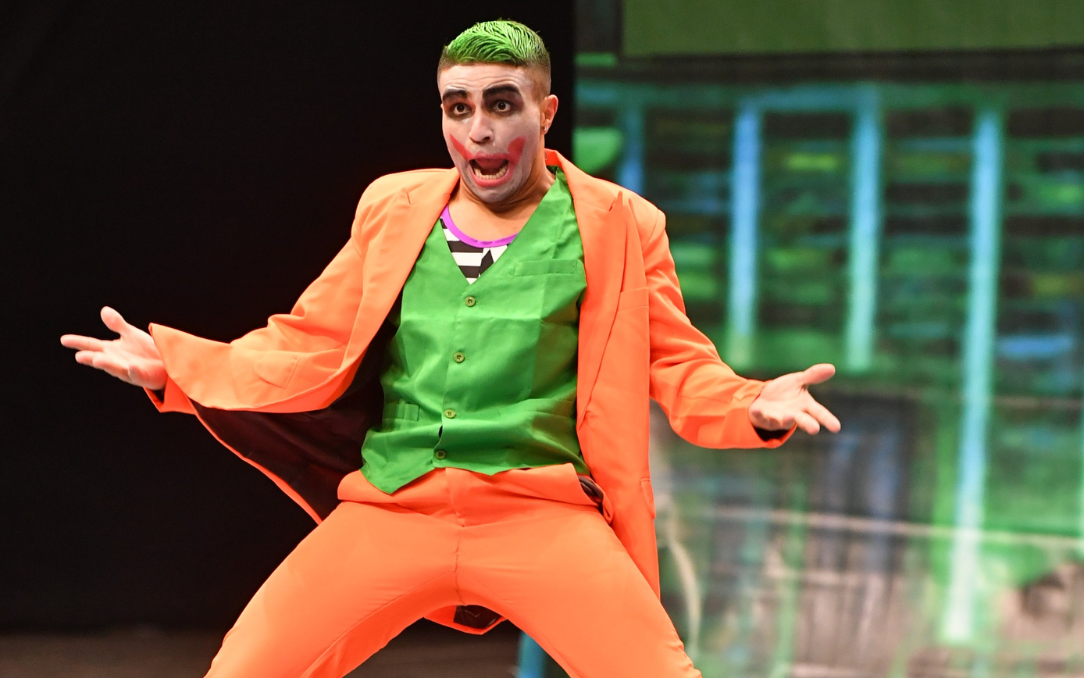 “Why So Serious?” was inspired by one of the most powerful villains of all time, the Joker. Louis says, “I have always been a fan of the comic book movies, and the Joker was my favorite villain.” After watching the most recent movie, the idea percolated in the back of his head. He says, “I just wasn’t sure how we would pull it off.” However, this has happened many times in the past when the team has decided to take on a story with lots of source material, Louis explains.

“We started as we often do, by thinking about the “moments” and events we wanted to portray. We pulled lots of music for inspiration and spent the pre-season playing with choreography, staging, and characterization. In fact, I think we workshopped 8 or 9 different pieces of music before we decided on the songs used in the final soundtrack. Then, once we started the season's production phase, we began building on the layers, and before we knew it, we got to January with a complete show.”

“Once we decided on the main moments of the show, developing the character came pretty quickly for us,” Louis explains. He discusses how critical it is for the character to be integrated within each piece of choreography. “The choreography was written with the personality infused, which helped the performers quickly layer in the character.” Additionally, the staff implemented other methods to help performers work on their characterization.

“We utilized improv sessions to help the performers build their character. We also highlighted small groups of the cast to help demonstrate the identity of each section of the show. This provided inspiration for other members to pull from.”

“Building the soundtrack for an AMP production is a multi-iterative process. We often pick 8-10 pieces of music to start with, and then, as we start to workshop, we whittle down to just the pieces we need,” says Louis.

This was the same process the team used for the 2022 production. “I will often have my laptop at rehearsal and make small tweaks while we are staging to extend or shorten sections as needed. Once we complete a section, I then work with our music producer to get everything cleaned up, balanced, and produced,” says Louis. 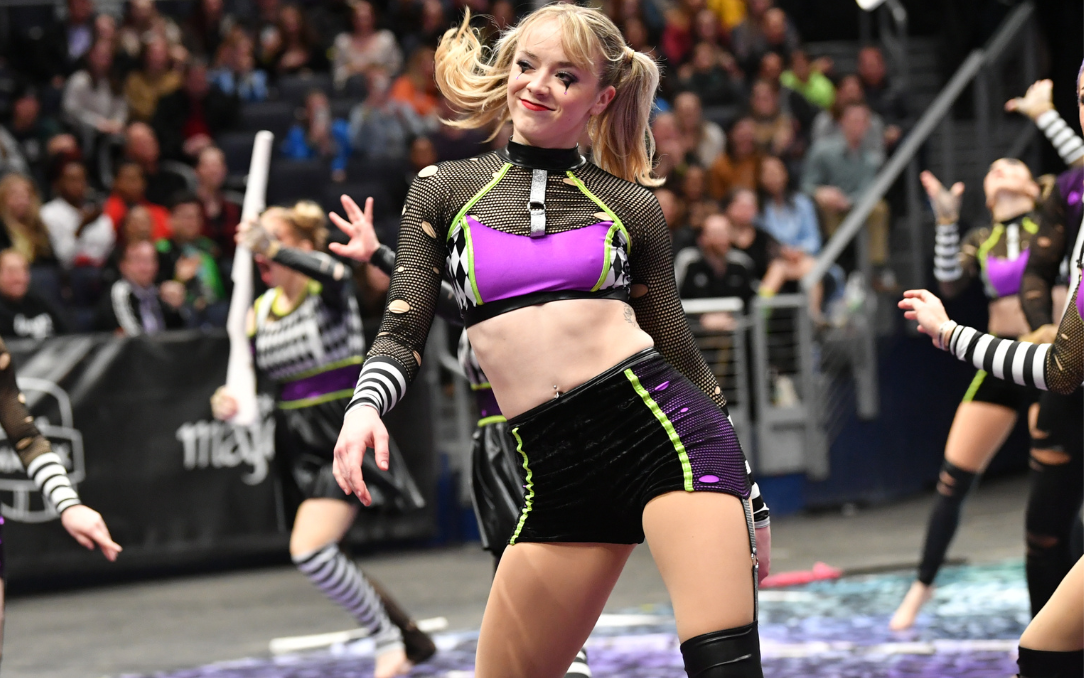 the creation of next-level entertainment

The crowd loved the 2022 production, just as they have loved each of AMP’s past productions. Louis explains that their choices are highly influenced by what the audience may relate to. “The design team looks to tell stories that the audience may be familiar with or be able to relate to in some way. One of the benefits of choosing a show like this is that the audience feels connected to the show and invited into the story. This leads to a level of participation or appreciation for what the performers deliver.”

However, Louis clarifies that it’s not just the show concept that draws the audience in. “The performers truly are the most important factor that leads to our program’s ‘accessibility’ with the audience. We spend a lot of time working with the cast on performance and communication. This includes conversations about the character, the role, and the identity of each production. These conversations are ongoing throughout the entire design process, from workshopping through to the final cleaning sessions. Without the wonderfully talented performers who join our cast, these productions would never come to life.”

Some performers come to AMP because they love the type of performance opportunities AMP provides. However, Louis explains that recruitment looks a bit different every year. “We think some performers are a bit intimidated to join a color guard like AMP. Others find their home and are with us for many seasons. This year, it looks like we will have many new faces at our auditions, and we are excited to get back in the gym and start working on our next story.” 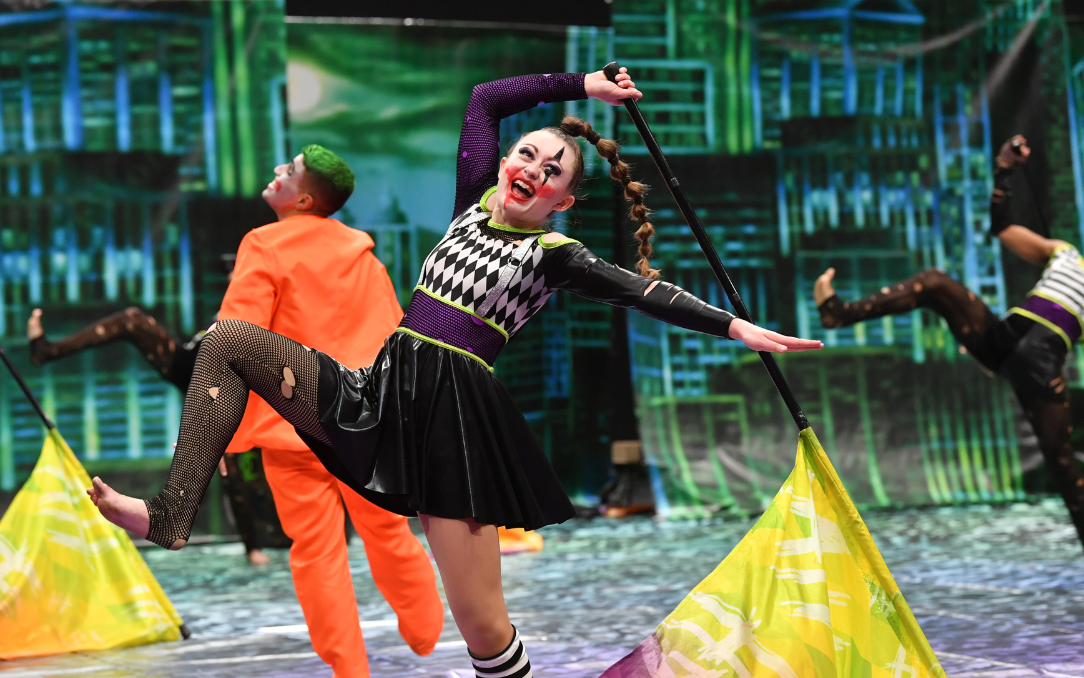 When asked what advice Louis could offer others regarding show design, he says, “the best advice I can give is to find your voice as a designer.” Louis says, “find something you want to listen to or watch and start writing. Although many designers feel they need to start at the beginning, Louis urges that’s not necessary. “When you get in the gym with your performers, if you have a great idea for a section of the show, start there. Don’t start at the beginning. Finish your first design day feeling like you produced something you’re proud of and excited about. This will put you at ease and help you get started.”

Most importantly, Louis emphasizes how important it is to read the sheets for your class. “Sadly, I didn’t start reading the backs of my sheets until a few years ago, and I probably would have made better choices in my early teaching days had I just read the sheets. Those are the rules of the game. They are the roadmap to success. Read them and understand what the words mean. Look at how you earn points so that you can self-evaluate as you progress throughout the season.” Understanding the sheets can also help you to assess criticism and feedback from others more effectively. Louis says, “the added benefit is that when you go to critiques, you can have more constructive conversations with the judges.”

Louis also discusses how critical it is to know whom you are working with as performers. “Know your kids. Know what they can do and what you can get them to achieve in a season. Push them, but make sure that, when you get to the last show, they can deliver the best show of the season.” 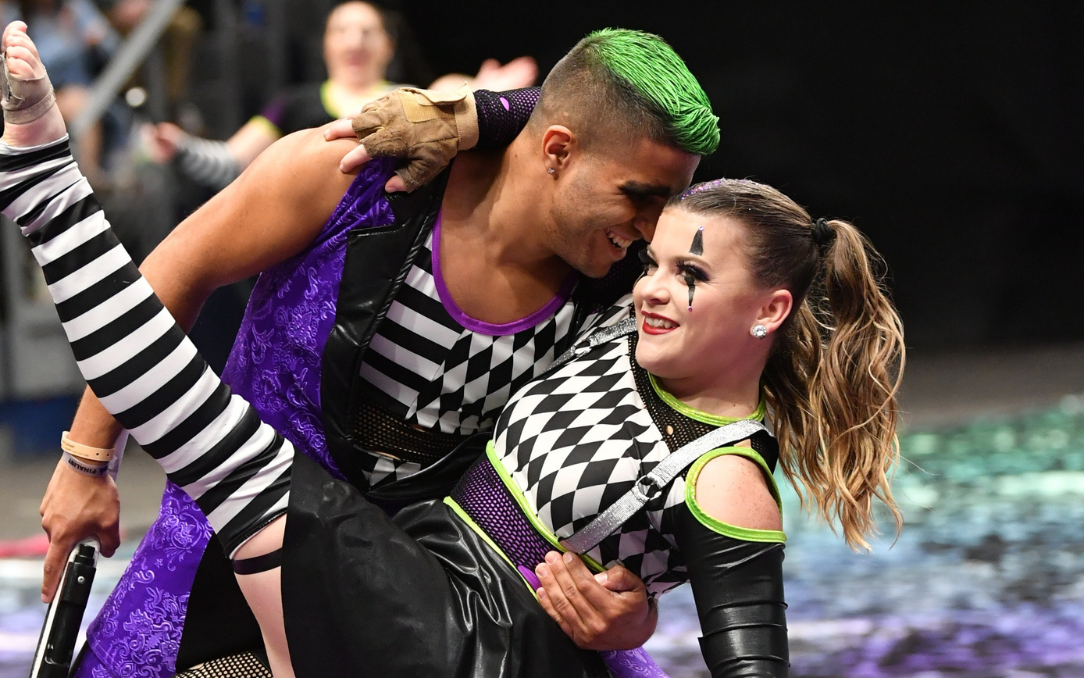 It’s also essential to pick a concept that matches your performers. “Pick shows that match their personality. Some kids love fun shows, aggressive shows, dark shows, or pretty shows. Figure out what your kids like to do and give them that.” If you pick a concept that matches your performers, they will look good and feel good on the floor. “Not to mention,” Louis says, “they will be far more excited to come to practice each week.”

Matt Hurley discusses how program recruitment is critical. He says, “the first step to a successful organization is the administration. You have to be successful off the floor as well as on. We have been fortunate enough to have some members stay with us for 10+ years. They will stick with you if you make them a part of the growth process. Make sure the members receive proper instruction, have adequate rehearsal facilities, and have stability on and off the floor.”